If we look into the universe with high definition telescopes (the Hubble telescope orbiting the Earth has done a very good job here) we observe far away galaxies in different shapes. These are wonderful pictures and awe inspiring.

Setterfield states these shapes look quite a bit like the shapes of plasma that can be seen in the lab. More about his model below in the links.

Perhaps it’s because it is gravity that keeps the moon going around the earth, and the earth and all the planets going around the sun. But whatever the original reason, the standard model for the universe and the galaxies and stars is based on the force of gravity. Gravity certainly exists!  We can see the effects of it everyday.  But, all things considered, gravity is a very weak force. You defy it every time you lift something up.

And because gravity is such a weak force, scientists cannot figure out how galaxies came together. They cannot give an explanation for the first stars forming. The fact that the outer sections of the spiral arms of galaxies spin around the center as fast as the inner sections of the spiral arms do is something they cannot deal with without figuring that the vast majority of the universe must be made up of dark matter. Dark matter is stuff we cannot see. We never have seen it. We have never found it in any form using any instruments. But it must be there for gravity to work, forming and keeping the universe in the way that it is. To the imaginary dark matter has been added dark energy and dark force, all necessary to support the gravitational model.

We all know the common three states of matter: solid, liquid, and gas. Generally a solid when heated will go to a liquid state and then a gas state. But heat up that gas enough and electrons can be stripped off the atoms. When this happens, you have a plasma. Plasmas exist in three modes: dark, glow, and arc. We cannot see plasma in the dark mode. Our earth, and all the planets are surrounded by giant plasma spheres. A plasma in glow mode is what you see in neon lights. These plasmas are produced by electrically stripping electrons off the atoms instead of using heat. Plasma in arc mode can be seen in lightning or an arc welding torch.

When we work with small plasma filaments in the lab, some interesting things happen. When two of them approach each other, they start to interact. This interaction has been filmed and what we see is that just two filaments end up producing every structure we see in outer space, quickly and efficiently. No gravity needed. See the stills of the progress above. In these pictures we are looking down on the two filaments as they start interacting. 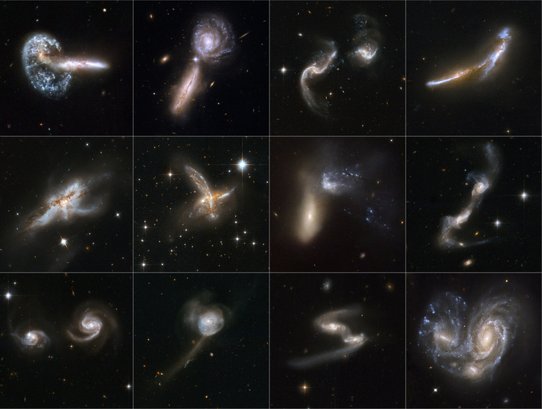