We come to the limits of science when studying the origin of the universe and of life. But we want to know where we come from. Quite a few people would like to know about origins without asking God. If He is there and created everything, He must know more than we ever can hope to find out. Our premisses will play a role too: nobody works on a blank canvas when looking at the data. See the diagram below.

Science is limited because it needs proof, it needs repeatable experiments. Quite a large part of the study into origins is historical science (see Exploring Science): we cannot redo a big bang and it is hard to know for sure whether processes we see now can explain the past.

In trying to make a model of how everything came into being, we will of course scientific data.

In science we do observations and experiments to support our theories - but the link isn't always st straightforward. Quite often the theory precedes the supporting observations or experiments, for instance in the case of the model of Copernicus and the theories on relativity of Einstein. A theory or model has to explain the known facts as well as possible – until another theory does a better job. Science is a human effort and scientific truth is at best temporary. For a supposed evolution another problem is added: we have to look back in time, which means that repeatable experiments are problematic and how do we measure time?

Modern science is partly due to the work of christians working as scientists, who did their research wholeheartedly while clinging to what God states in his Word. They were convinced creation was done by the Word of God: ‘He spoke and it was’ (Ps.33:9). What you see didn't originate from what you can observe (Hebr.11:3). The six days of creation can't be objects of normal scientific research - because they are so special and a once-only event. We can only observe the results of creation – not even completely because some species got extinct and a worldwide flood occurred.

If the solar system was brought about by an accidental collision, then the appearance of organic life on this planet was also an accident, and the whole evolution of Man was an accident too. If so, then all our present thoughts are mere accidents - the accidental by-product of the movement of atoms. And this holds for the thoughts of the materialists and astronomers as well as for anyone else’s. But if their thoughts - i.e., of Materialism and Astronomy - are merely accidental by-products, why should we believe them to be true? I see no reason for believing that one accident should be able to give me a correct account of all the other accidents. It’s like expecting that the accidental shape taken by the splash when you upset a milk-jug should give you a correct account of how the jug was made and why it was upset.

Be careful with all information you find - it can be flawed, outdated, biased, .... using different sources can help of course. And don't think creationists always agree on everything - just be open-minded and compare ...

More pages on the topic

This page is the introduction to five sub-pages (see menu above). Also take a look at Strata (with sub-pages about fossiils and the flood) and Bible and origins (sub-pages on arguments for theïstic evolution brought in by BioLogos). 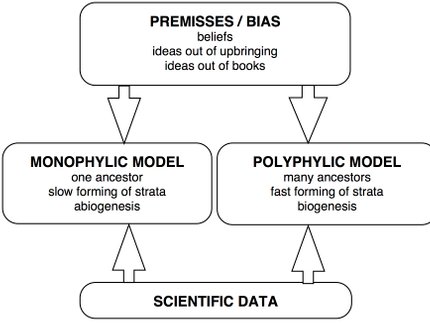 It is important to realise that your opinion on many matters are formed from at least two sides and that there in principle two ways to approach questions of origin: either all organisms are family related (resulting in a tree of life) or they are only related within a basic type.