More and more we discover formerly hidden secrets of the DNA. It really is a very special information system, with different levels. The information is carried by the DNA code with genes, groups of genes and whole network of genes - with regulatory genes on different levels. Everything put together cries design!

Scientists discovered that mutations preferably happen in so called hotspots - elsewhere they happen less easily. Peter Borger (see link nr. 1) states that small genetic elements (jump-DNA) cause certain genetic programmes to be switched on or off. In this way some hidden programmes can suddenly be activated, making it possible for an organism to adapt to a different environment. This way jump-DNA causes adaptive radiation without adding new genes - it's rearranging existing material.

If hidden programmes and redundant genes aren't used, they can get damaged or even lost: the use-it-or-lose-it principle. That's degeneration: information gets lost. This way related species will show similarities, but differ genetically in some ways because they don't use the same (existing!) programmes and have lost superfluous ones.

You could state that a basic type starts with the DNA (genome) of a generalist: it can be used in many different circumstances. Adaptive radiation causes speciation. The new species will all loose different parts of the genome and (some) will turn into specialists. Think of spiders living in caves for generations: they don't need eyes and loose (some of) the genes connected to seeing. Plants in tropical regions use the C4-system for photosynthesis, while in regions with a moderate climate the C3-system is used. Some plant species still have both systems and some use the one and have the other one rudimentarily in the genome.

Another option is re-arranging the chromosome material (like in the picture). This way the number of chromosomes can also change which can result in what is called 'reproductive isolation', making it possible for the two new groups to grow apart further (speciation).

Carefully studying the DNA we can try to produce a phylogenetic tree, but this is problematic. Many different trees have been proposed -  with changes almost every year. The New Scientist stated in 2009: Darwin was wrong. What the tree looks like depends on the genes you use to construct it and many trees look totally different from what we would expect when looking at anatomical similarities. Maybe these trees are like a fata morgana: coming closer they disappear.

The origin of virusses

The role jump-DNA can have in adaptive radiation and speciation sets the question of the origin of viruses in a different light. Especially RNA-viruses could very well be derailed jump-DNA elements. Some types of jump-DNA are good candidates: many call them endogenic retroviruses. Genetic analysis of RNA-viruses shows that their origin is later than the origin of their hosts, which makes it logical to suppose they originate from their hosts.

These types of jump-DNA will first be translated into RNA, than packed in a protein coat (possibly to prevent them to be used in the wrong place) to be built in elsewhere: it seems a pre-programmed way to cause variation (like what we know of B-lymfocytes: they do that to produce specific antibodies). That's why some viruses can cause cancer!

below: the possible role of jump-DNA in speciation and adaptive radiation 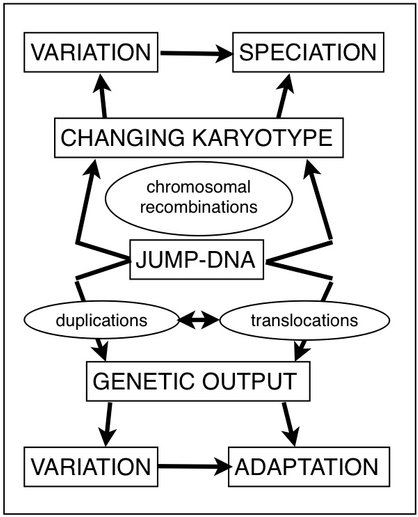