Model of Ptolemy
Model of Copernicus
Model of Tycho Brahe

We see sun, moon, planets and stars rise in the East (roughly), climb higher towards the South and descent and set roughly in the West. In the North sky we only see stars, which in their daily movement seem to revolve around the North Star (Polaris). Does the Sun orbit the Earth or does the Earth revolve around it's axis? This important question for scientists played a big role in the development of science. By the way: did people in the Middle ages really believe the Earth was flat?

In summer the sun rises more to the North, in winter more to the South. Look at the Sundial and the two gnomon shadow patterns below:

The daily and yearly movement of the Sun can be explained as follows:

Stars show the same daily movement as the Sun but a star day is about 4 minutes shorter than a solar day. This is explained as follows:

To prove Copernicus right parallax of stars had to be shown (Bessel was the first to do that in 1838) - which is very small, the nearest star being 4 light years away. See for an explanation of parallax the page Universe.

Also see the arguments for the various models shown above.

The universe is very large and has a separate page.. 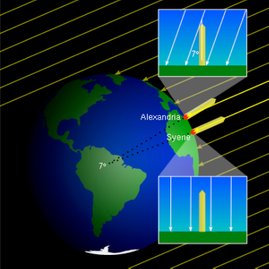